skip to main | skip to sidebar

Please stop-you're scaring me....and the rest of the thinking world.

John Weaver, John McCain's former top strategist, says the Republican candidate is making both a moral and a a tactical mistake by letting abusive hecklers have free rein at rallies:
"People need to understand, for moral reasons and the protection of our civil society, the differences with Senator Obama are ideological, based on clear differences on policy and a lack of experience compared to Senator McCain," Weaver said. "And from a purely practical political vantage point, please find me a swing voter, an undecided independent, or a torn female voter that finds an angry mob mentality attractive."
http://www.huffingtonpost.com/2008/10/10/former-mccain-strategist_n_133523.html
Let me give you both a clue as to what we're all really made about-THE ECONOMY...the stock market having its' worst week ever, the Congressional Bailout/Recovery Plan-and the sneaky meanderings of Republicans and Conservative Fat Cats who want to nationalize losses and privatize gains in the housing market fiasco...I'll stop there, I could go on of course!
Posted by JR ZEE GURL at 12:45 PM No comments:

It's the Economy, Stupid 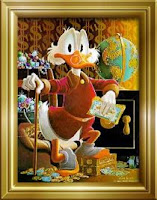 Let's not talk about the debate last night. I have my opinion who won. The rest of you have your own opinion on who won. We can talk about it later.

Have you had enough of the roller coaster that is the economy this week?


I get sick every time I click into the current numbers on the Dow. I made the tragic mistake of looking at my 401K yesterday afternoon. I felt sick for all of the impending retirees over the next few months.

Makes me pine for the days in 1989 when I was a kid and had no clue what all of it really meant.

Also makes my current job hunt seem all the more desperate. The unemployment rate in New York currently is 5.8 % and New Jersey is 5.9%. That's up roughly a percentage point in each state since the same time last year....

While driving on Monday morning I heard an interesting factoid on the Brian Lehrer show on WNYC (New York Public Radio)-and I am paraphrasing here since I can't find the exact quote online right now.

The topic was the bailout/recovery and Wall Street. The woman being interviewed said that 13% of New York State's total income was made below 14th Street in Manhattan.

Okay the state of New York is total 54,555 sq miles in size(thanks Wikipedia) and has a population of 19,297,729 (2007 quote from Wikipedia). It's extrememly safe to say that New York state makes more money and has a larger population than certain foreign nations!


And 13% of the state's income is based in an itty bitty a parcel of land that is inside of the 22.7 square miles that make up the island of Manhattan.


There's some food for thought.

CNBC.com listed a nifty list of what science and technology could have landed with the Bailout/Recovery Bill;

For the sake of argument, however, here is a short list of what $700 billion would buy in the realm of science and technology:
1. Five complete Apollo space programs, which put 12 men on the moon between 1969 and 1972. Cost of Apollo program in 2005 dollars: $135 billion.
2. 23 years of funding for the National Institutes of Health. The 2009 fiscal budget is $30 billion, the same as 2008.
3. 259 years of funding for the Defense Advanced Research Projects Agency, an independent research agency within the Department of Defense that has funded some of America's major innovations, including key elements of the solid-state electronics revolution.
4. 304 human genome projects at $2.3 billion apiece.
5. 653 MacBook laptops fully loaded with software for every child on Earth between the ages of 4 and 18.
6. 1,850 years of funding for the Department of Energy's National Renewable Energy Laboratory, which is on the front lines of developing alternative sources of energy. The lab's budget was increased in 2007 to $378.4 million, from $209.6 million in 2006.

There's some food for thought.

It's about 4 minutes of common sense-from Donna Brazile at the New Yorker Festival held this weekend,

"If I were running this campaign...."

This was before the messy ugly tone the campaign took these past few days.
Posted by JR ZEE GURL at 11:52 AM No comments:

If you can bear to part with books, here's an interesting online service I just happened upon.

Family owned and operated, Novel Action is a membership based online book exchange designed for book lovers. Our goal is to provide our members with an easy, inexpensive way to get used books, a great selection of books and incredible service.

For a flat rate of $25 a year plus shipping costs you can take part in the bonanza.

You browse their online shop.


Pick out the books you are interested in getting your book hungry grubby little hands on.


Go over to your shelf and decide which child, err I mean book, you can part with.


Pick a book from your shelf for each book you chose at the exchange site.


Pack them up and ship them off to Novel Action. (they say about $4-$5 for four to six books)


Wait a few days for your newly acquired used books to arrive.

All in all, a good idea for the idea, you know that "re-use, reduce, recycle" theme we are supposed to be getting behind. But honestly I see book dealers using it more than the average joe reader.

My problem with this service-parting with the books that I already have! And then paying the $25 fee, and the shipping.

Make it free shipping, then I'll consider parting with some of my books.

If the time is right.

Oh brother-who I am I kidding? I'll stick with my library card for the time being!
Posted by JR ZEE GURL at 9:36 AM No comments:

What is up with the McCain Campaign?

I'm just appalled by the performance in FL yesterday by the Lee County Sheriff Mike Scott. Here's the blurb I pulled from CBS news blog From the Road-

After delivering brief remarks in support of Palin, Sheriff Scott flipped the switch and used Barack Obama’s middle name in order to incite the crowd of thousands of people who have already gathered here. “On Nov. 4, let’s leave Barack Hussein Obama wondering what happened,” the law enforcement officer said.

Many of the thousands of people in attendance roared their approval at Sheriff Scott’s dig at the Democratic nominee, whose Kenyan father shared the same exact name as his son. After Sheriff Scott left the podium, local radio host Mandy Connell took the stage next. She too drew a loud ovation when she said Obama “hangs around with terrorists.”

Video clip of Sheriff Scott's comments and then his non-apology explanation of his comments;

Put them on pronto.
Posted by JR ZEE GURL at 9:14 AM No comments:

If only it was this simple with the Middle East-FOOD FIGHT!

Oh brother.
The only falafel news I can be sure of-
Best Falafel in New York-Rainbow Falafel-Union Square, NYC
http://www.menupages.com/restaurantdetails.asp?areaid=0&restaurantid=5381&neighborhoodid=0&cuisineid=68&home=Y#restinfo
Best Falafel in my neck of the woods-it's new place, we just tried a few weeks ago and it was yummy-The Falafel Hut in Upper Montclair, NJ. What a great name for a falafel place, right? No web site to link, they're still new folks!
Check out the rest of The Daily Beast here;
http://www.thedailybeast.com/